Fiji's Minister for Fisheries has created two new Marine Reserves with Regulations made under powers conferred by section 9 of the Fisheries Act, 1941

On, Friday, 19th January 2018 by Legal Notices No. 3 and No. 4 the Honourable Minister for Fisheries exercised his powers pursuant to section 9 of the Fisheries Act, Cap 158 (Fisheries Act) to create two new marine reserves in inshore areas within Fiji’s fisheries waters.

The creation of the marine reserves has been by way of Regulations that are cited as:

In this legal bulletin we set out the powers that section 9 of the Fisheries Act provides to the Minister for Fisheries to create and declare marine reserves via Regulations. We also expand on the effect of these new Regulations that have been brought into force by being published (gazetted) in Fiji’s Government Gazette.

Marine reserves are also known as marine protected areas (MPAs), and as the Fiji Environmental Law Association and others explains in its recent publication “Towards an Effective Legal Framework for Marine Protected Areas in Fiji” there is:

No single, global definition of a marine protected area.

FELA therefore adopts the definition of a MPA utilised by advisors to the Convention on Biodiversity, being:

Marine and Coastal Protected Areas mean any defined area within or adjacent to the marine environment, together with its overlying waters and associated flora, fauna, and historical and cultural features, which has been reserved by legislation or other effective means, including customs, with the effect that is marine and/or coastal biodiversity enjoys a higher level of protection that its surroundings.

Section 9 of the Fisheries Act, provides broad administrative powers to the Minister to make Regulations (secondary legislation) and this includes, but is not limited to, for the purposes of:

This Regulation declares the Kiuva Marine Reserve and 200 metre buffer zone over an area of Fiji's inshore fisheries waters close to Kiuva Village located in the South East corner of Viti Levu and not far from Suva. The area of the declared marine reserve is 7.285km2 and this marked in a map attached to the Regulation (photo below).

The Kiuva Marine Reserve is declared for:

The purpose of conserving, protecting and maintaining the biodiversity and productivity of the species of fish, sharks, rays, cetaceans, sea turtles and all marine organisms including coral and holothurian species within the demarcated area.

The effect of declaring the Kiuva Marine Reserve increases the legal protection of the area and this includes but is not limited to:

Regulation 3(6) makes it an offence to contravene any of the regulations and imposes heavy penalties upon conviction, including:

In addition, if there is any breach of the prohibition on fishing the Ministry of Fisheries has power to seize

any marine organism, fishing equipment, conveyance including vehicles and vessels used for their transport, or other property involved in a breach…

The Kiuva Marine Reserve Regulations also includes additional protection in the 200 meter buffer zone around the Marine Reserve which prohibits the use of:

any form of indiscriminate fishing gear and any fishing equipment to target any species of fish, sharks, rays, cetaceans, sea turtles and any marine organism such as corals and holothurians within the Buffer Zone. 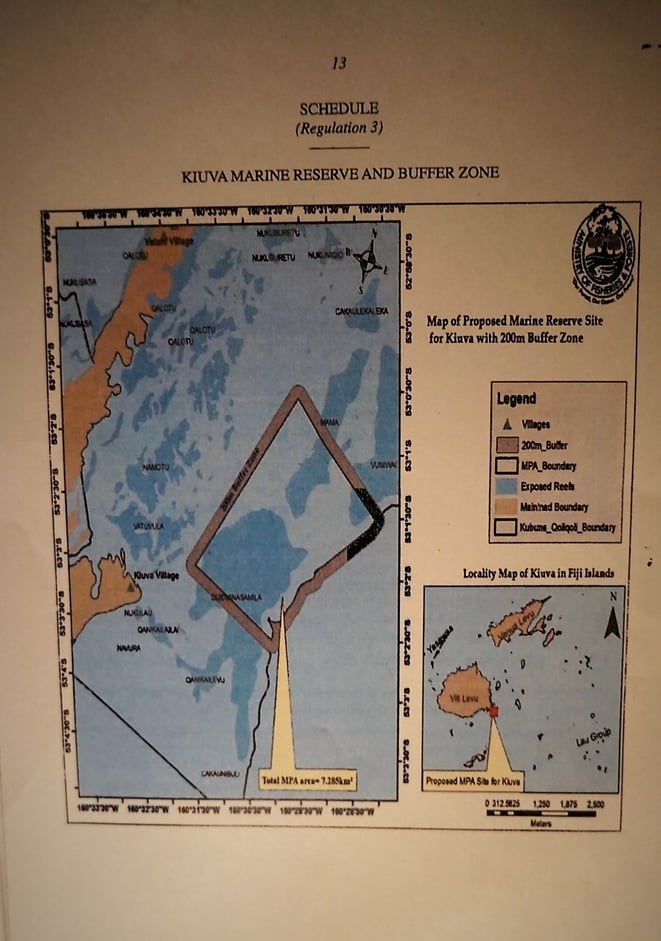 This Regulation declares the Naiqoro Passage Spawning Aggregation Marine Reserve and 200 metre buffer zone over an area of Fiji's inshore fisheries waters just off the East coast of Kadavu Island between the coastal villages of Nukuvou Village and Malasawalavu Village. The declared area is 4.830km2 and marked in a map attached to the Regulation (photo below).

The Naiqoro Passage Spawning Aggregation Marine Reserve is declared for:

The purpose of conserving, protecting and maintaining the biodiversity and productivity of the species of fish, sharks, rays, cetaceans, sea turtles and all marine organisms including coral and holothurian species within the demarcated area. 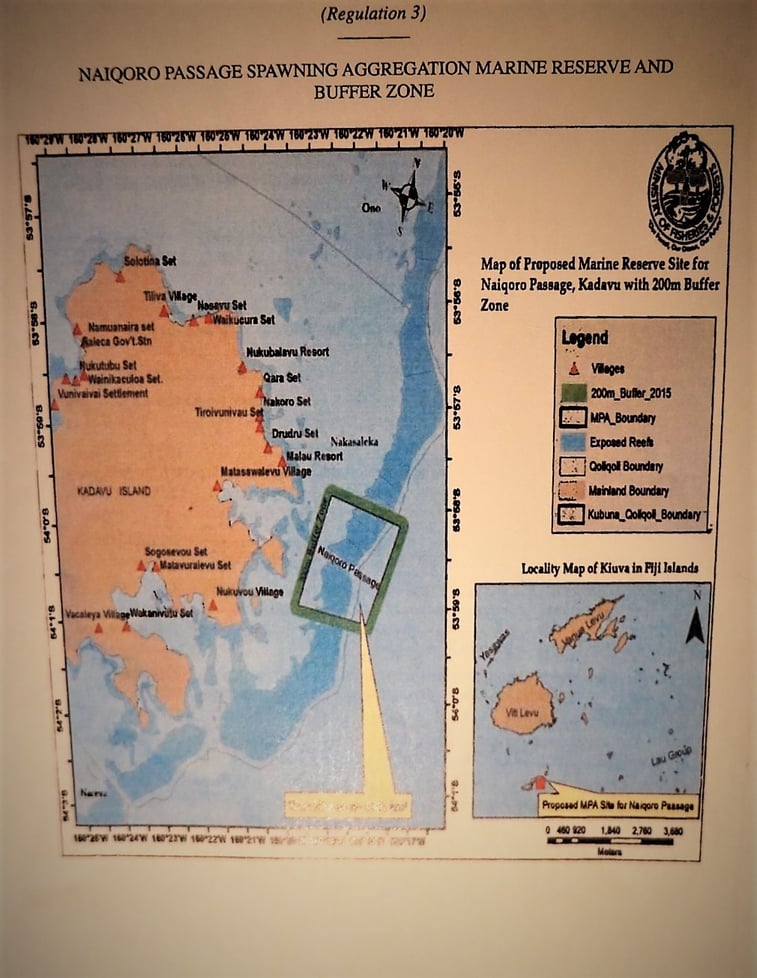 The new Fisheries Regulations declaring two new marine reserves brought into force this January 2018 following a decision of the Minister for Fisheries accords with the well publicised commitment made by the Fiji government in 2005 to protect at least 30% of Fiji’s marine areas.

It is likely that these Regulations were made and gazetted following consultation between the communities, their representatives, the iTaukei Affairs Board and the Ministry of Fisheries. The legal effect of creating these Marine Reserves via Regulation under section 9 of the Fisheries Act is that the specified prohibited activities set out in the Regulations cannot be undertaken by any person in the declared Marine Reserve area and that includes any person who may have previously held traditional fishing rights within that area.

In saying this, we also understand that scientific research points to numerous benefits from the creation of no-take fishing areas as fish may spawn within them and this can increase the supply of fish outside the Marine Reserve as fish, clearly do not respect the legal boundaries of the declared Marine Reserve area.

We also note that the CBD definition of a MPA does not exclude MPAs that are not reserved by legislation but suggests that the reserved area receives a greater level of protection through other effective means. It is in this area that Fiji’s Locally Managed Marine Areas (FLMMA) operates as they promote sustainable fisheries management with their communities that includes the use of traditional protected area tools including declaring a traditional tabu area. Tabu (pronounced tambu) is the word that taboo owes its origins to, and within a tabu area fishing and other activities may be prohibited for the time that the tabu remains in place. However, for a tabu area to be effective it is important that any commercial fishing licence issued by the Ministry of Fisheries includes as a condition that no fishing can take place within the declared tabu area.

There is much debate within coastal and subsistence fisheries experts regarding whether a legally declared Marine Reserve or traditional tabu area is more appropriate or effective in the Fiji context. There are also concerns raised in relation to the monitoring and enforcement of fisheries law in general. With regard to the latter issue, the enforcement of fisheries law is becoming more effective under a collaborative approach across government agencies led by the Ministry of Fisheries and supported by NGO partners. It also seems likely that the heavier penalties for breaching declared Marine Reserve Regulations may act as an incentive for greater compliance.

In relation to the debate over the most appropriate form of MPA, from a legal point of view, we cannot comment on whether the final decision to make Fisheries Regulations is right or wrong, or the most appropriate mechanism, as that decision is for Fiji’s decision-makers and in particular, the Honourable Minister for Fisheries. However, we do consider that it is important that any person with standing and a legitimate interest in the area declared as a marine reserve should be fully and fairly consulted before the decision is made.

As lawyers interested in the promotion of sustainable use of Fiji’s natural resources including good fisheries management, it is also encouraging to see that this debate on the most effective mechanisms to protect Fiji's marine areas and resources is happening at all. It is also heartening that the Honourable Minister for Fisheries and other interested parties are determined to provide increased protection for Fiji’s valuable and essential marine areas and resources.

If you would like a soft copy of the new Regulations in PDF please email: James@sas.com.fj