On 1 December 2016, the Honourable Minister for Fisheries, Mr Semi Koroilavesau announced that the use of underwater breathing apparatus (UBA) to harvest and export bêche-de-mer (BDM), the processed and traded form of sea-cucumber, would no longer be permitted under Fiji law.

The reports in Fiji’s press have characterised this as a ban on BDM harvesting using UBA, and this has led to some in the fishing industry questioning the jurisdiction and legality of such a directive.

In this bulletin we consider the legal basis for denying permission for the use of UBA for harvesting BDM, set out other laws relating to the harvesting of BDM, and briefly consider why it is important to uphold the law on the use of UBA to harvest BDM which has been in force from 1997. 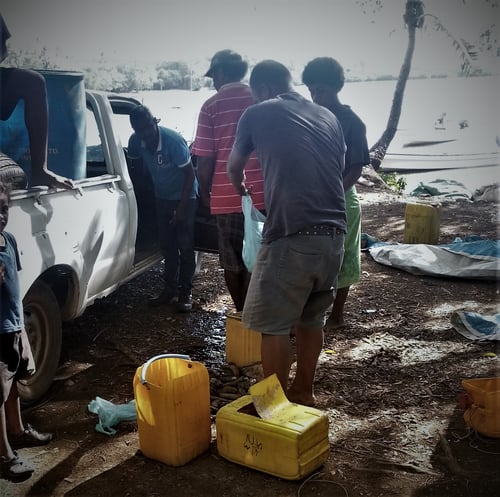 Section 9 of the Fisheries Act, 1942 (as amended) CAP 158 (Fisheries Act)  provides the power to the Minister for Fisheries to make regulations. The Minister can use regulations to prescribe certain standards that the fishing industry and fisher-folk must abide by, and this includes, but is not limited to:

In 1997, the then Minister for Fisheries drafted the Fisheries (Restrictions on Use of Breathing Apparatus) Regulations, 1997 under the Second Schedule (Rule 11).

Regulation 11 prohibits the use of UBA to harvest all fish, which includes BDM. The relevant part of Regulation 11 provides “No person shall in any way collect, take, or dive for fish using underwater breathing apparatus or be in the possession of UBA for the purpose of collecting, catching, and diving for fish”.  Section 2 of the Fisheries Act defines “fish” as any aquatic animal whether piscine or not, and included shellfish, sponges, holothurians (beche-de-mer), sea-urchins, crustaceans, and turtle and their eggs” (our emphasis).

However, Regulation 5 does permit exemptions on the use of UBA, but such exemptions must be approved by the Permanent Secretary of the Ministry for Fisheries upon written request. To obtain an exemption for the use of UBA the applicant must meet certain conditions, and these conditions include

In the Minister’s statement, reported on 1 December, in the Fiji Sun Newspaper, he explained: “during my visits around the country, I found out from members of the communities as well as health officials of various cases arising from the use of UBA’s. Some have unfortunately passed on whilst many are still bedridden because of the impacts of UBA”.  The Minister was referring to the human cost from the use of UBA to dive for fish, including predominantly BDM.

The exact figures for injuries and deaths as a result of the use of UBA in Fiji to dive for BDM are difficult to ascertain with accuracy. According to the Fiji Times, during 2014 alone, there were a total of 12 recorded deaths resulting from the use of UBA for BDM diving in the province of Bua, Vanua Levu. A joint study undertaken by the Ministry for Fisheries and the Pacific Community (SPC) determined that  CWM hospital’s hyperbaric unit record showed that in the years 2012-2014 there were a total of 50 injured individuals treated of which 37 were BDM divers. In the mentioned period, 14 cases were recorded from the Western division where there were only 2 exemptions enabling the use of UBA granted by the Permanent Secretary. Sadly, according to experts it is also likely that the numbers of deaths and injuries that are reported are underestimates as it is suggested not all deaths and injuries are recorded. The same study by the Ministry for Fisheries and SPC determined that the cost to the State of medical treatment and hospitalisation for those injured while using UBA to dive for BDM averaged to approximately FJ$515,000.00 per year between 2012 and 2014, which works out to be approximately FJ$1.03m for that 2 year period.

While the direct human and economic costs of using UBA to dive for BDM are, and have been quantified over certain defined periods, the health of the stocks of BDM and fishing stocks are concerns that have been well documented by Fiji based marine scientists. The Minister for Fisheries has made it known that the current health of Fiji’s BDM are of real concern to him, and at the forefront of his mind is to how to address the unsustainable fishing practices that have led to plummeting stocks of Fiji’s sea cucumbers / BDM. In the course of the Speaker’s Debate “How can Fiji’s fishing industry be protected to ensure long term sustainability?” held in Suva on 1 February 2017, the Minister explained that stocks of BDM would be monitored closely over the next 6 months and if they did not recover he would consider regulations that would ban all export of BDM in the interests of the sustainability of the Fiji stock. Such a ban is not without precedent as a species of BDM known as sandfish (Holothuria scabra) was banned from being exported around 2003/2004.

The Fisheries Act, currently contains the only management measures that apply to BDM, other than traditional fisheries management measures that are being eroded in the face of quick and needed economic returns at the community level. The Fisheries Act provides certain blanket size limits relating to the export of BDM across all species of BDM. Section 25A states that “No person shall export, either in natural form, holothurians (beche-de-mer) of species Metriyatyla scabra (Holothurian scabra) (dairo) (sandfish) or shall take, be in possession of, sell, offer or expose for sale or export holothurians, either in a natural or processed form, or of any species whatsoever of a length less than 7.6cm. Sections 27 and 30 of the Fisheries Act provide power to the Permanent Secretary to give exceptions from the provisions of section 25A if there is evidence demonstrating that the fish originated from artificial spawning methods.

It seems likely therefore that if the stocks of BDM do not recover during the next 6 months where no exemptions will be given for the use of UBA to harvest BDM, that the Minister will be recommending new Fisheries Regulations specifically aimed at the BDM industry. From a fisheries management perspective this may include comprehensive management plans for BDM. We understand that various stakeholders including SPC have commenced work on such a management plan and other relevant stakeholders with expertise in this area like WCS, WWF, and FLMMA would be well placed to assist further in the adoption of a suitable management plan for BDM management in the Fiji context.

Many will welcome the Minister’s approach, as apart from the economic losses, and other ramifications associated with the collapse of stocks of BDM, the legal avenues or options for those injured or killed, or their families may be limited depending on whether the unfortunate diver was employed or self-employed at the time of the death or injury.

In the case of Tokasava V Nepune (Fiji) Ltd, the plaintiff, a diver who was employed by the defendant to dive and collect BDM for commercial purposes. A faulty regulator prevented proper mixing of Oxygen and Nitrogen for the supply for breathing air, and this caused the plaintiff to surface too quickly. In the process the plaintiff’s nervous system suffered damage and permanently impaired 83% of the plaintiff’s body. The High Court ruled for general damages to be paid to the plaintiff amounting to $50,000 with an interest of 6%, $90,000 for life-long loss of prospective earnings in the future, special damages of $305 and interest of 3% from the date of the accident to the date of decision, and the plaintiff was also granted his legal costs of $1,000 assessed summarily.

However, in the above case, the plaintiff was in employment and as such benefited from certain protections at law, including a legal relationship in both employment law and in the law of tort/negligence. However, in cases, which we understand are common in the industry, where divers rent the diving equipment from a 3rd party, who also happens to buy the BDM after it is harvested, then the law is less clear. While every case must be considered on a case by case basis, it is quite possible that in a scenario where the diver is renting the diving equipment that the Courts will consider that he or she took on all the risks associated with diving, and no person owes a duty in law to him or her. As such an injured diver may have no legal recourse in the event of death or permanent injury. That leaves the diver's family either bereaved with no financial recompense, or facing the emotional and financial burden of caring for a permanently injured relative.

In all the circumstances, the Minister for Fisheries concerns for BDM stocks and his conviction to do something to address their decline could benefit Fiji for many different reasons. As well as preventing the direct economic costs associated with the use of UBA that are borne by the State, and the human tragedies that have occurred, good management of stocks also provides an economic opportunity for Fiji. After all, BDM after its careful processing that follows a simple process of cleaning, boiling and drying is a highly prized product for its perceived nutritional and medicinal benefits in the South-East Asian markets. While prices fluctuate and are dependent on market forces and quality, BDM seems to routinely fetch US$500 per kilogram in the South-East Asian marketplace.

Unfortunately, up until recently the divers that risk their lives to collect sea cucumbers for processing into BDM receive a small fraction of the true value of BDM for their troubles, and the benefits tend to flow to a small group of middlemen and exporters. If stocks of Fiji's sea cucumbers do recover through good management, a longer term aim should be to increase the benefits that flow from the export of BDM both to the communities and the State as these will be the parties who will jointly implement and monitor the management plan for BDM in accordance with safe and responsible harvesting practices. 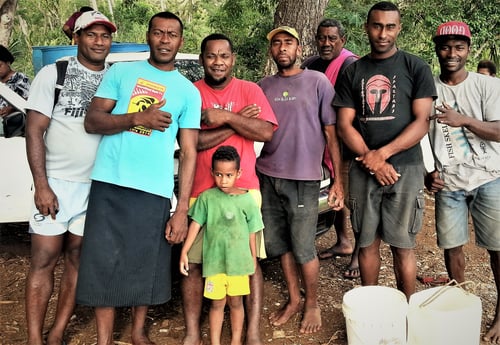 [photo of community members from Nakalou, Macuata, Vanua Levu who explained to us that they fish all night for sea cucumbers, clean and boil them during the day and who ultimately may receive between FJ$40-60 per person from a middleman/buyer for their efforts and risk over what is close to a 24 hour period of work.] 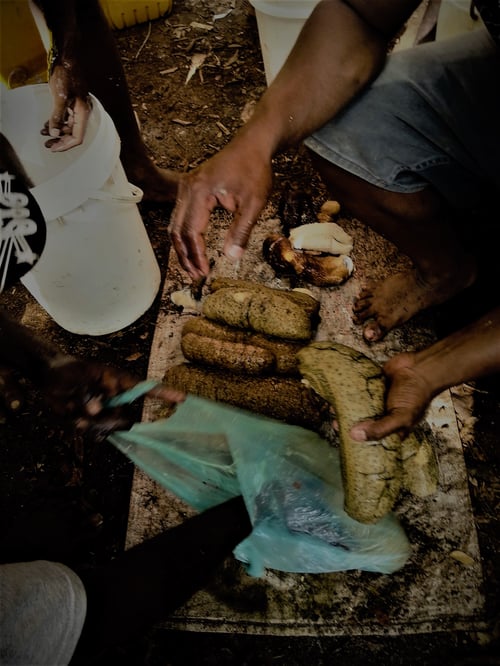