A unanimous decision of Fiji’s Court of Appeal Ramendra Prasad v Total (Fiji) Limited, Civil Appeal No. ABU 90 of 2018, 28 February 2020 (Lecamwasam, JA, Almedia Guneratne, JA, Jameel, JA) has found Total (Fiji) Limited (“TOTAL”) negligent and liable for a fuel leak that was discovered in September 2008 close to Nausori on the island of Viti Levu, in Fiji.

In finding TOTAL negligent, liable and responsible for an underground fuel leak, Fiji’s Court of Appeal has affirmed Fiji’s Environment Management Act, 2005, and the principle “polluter pays” as well as affirming the actions and findings of Fiji’s Department of Environment.

In this legal update we focus on the key legal principles affirmed by the Court of Appeal as they are significant in terms of Fiji’s environmental jurisprudence and good governance.

TOTAL is a subsidiary of Total S.A which is a French multinational integrated oil and gas company which is known as one of the seven "Supermajor" oil companies in the world with an average total revenue of approximately US$170 billion per year (based on an average of the last 3 years).

In around July 2008, a TOTAL fuel station in Fiji, operated by Mr Ramendra Prasad, noticed fuel leaking from out of the ground and flowing into the roadside drain that led towards the Rewa River. This caused Mr Prasad immediate concern as all the underground fuel tanks were owned, maintained and supplied by TOTAL, and TOTAL was promptly notified by Mr Prasad. Despite all attempts by Mr Prasad and his employees, who collected leaking fuel on a daily basis, TOTAL’s actions failed to fix the leak, and in November 2008, Fiji’s Department of Environment had to step in and stopped the supply of fuel to the service station.

Court of Appeal - unanimous finding of negligence and liability

After a careful look at the expert evidence and the leading case law from both the Fijian and English jurisdictions the Court of Appeal determined that TOTAL was negligent in relation to the leaking fuel. Further, in accordance with Fiji's Environment Management Act, 2005 the Court of Appeal found that TOTAL's negligence had caused a pollution incident that it was liable for.

The leading opinion of the Court of Appeal was provided by Lecamwasam, JA, who found at paragraph 15 of the Judgment that the expert scientific evidence had proved a significant underground fuel leak, and in accordance with Fiji law:

Pollution of the environment is a regulated matter and the provisions of the Environment Management Act regulate the activities of the parties in this case.

Section 50 of the Act is a reflection of the “polluter pays principle”, and is meant to act as a deterrent and ensure all-round concern for the human life, as well as the environment.

In the light of this strict statutory provision, which prescribes serious punishment for offences committed under the Act, a court must take cognizance of the pollution incident so that the language and the spirit of the provisions given under the Act, are effective.

(2) A claim under this section may be set off against any compensation paid under section 47(2).

Lecamwasam, JA considered all the evidence that was part of the High Court verbatim transcript (which is public record), and the leading case law on negligence, and at paragraph 31 of the judgment found:

Accordingly, I have no hesitation in saying that negligence on the part of the Respondent [TOTAL] has been established. In that regard, I hold that the learned Judge had erred and misdirected and/or non-directed himself on the law and the attendant principles impacting theron.

TOTAL had argued, contrary to its own expert witness (Dr Dunbavan) and the findings of the contemporaneous Fiji government investigation, that the fuel leak was negligible.

In November, 2008, the Environmental Department directed the Appellant to suspend supplying fuel. The Respondent [TOTAL] submits that it was due to this order, that it was prevented from supplying fuel to the Appellant, and it is “not responsible” for the losses of the Appellant. I am of the view that this is an untenable contention. The leakage occurred from property belonging to the Respondent [TOTAL], although it took place on the Appellant’s land. If the leakage was negligible, as concluded by the Learned Judge, it is unlikely that the Department of Environment would have directed the Appellant to stop supplies.

The Court of Appeal has determined that several heads of damages must now be assessed by the High Court of Fiji in accordance with the evidence, the law of negligence and the Environment Management Act, 2005. In addition, TOTAL has been ordered to pay costs of $15,000 within 28 days of 28 February 2020.

Given the significance of this judgment for Fiji’s environmental law and governance, we will provide further updates in due course. However, the message is that a potential polluter should understand the strict requirements of Fiji's Environment Management Act, the potential serious consequences of non-compliance, and ensure that it follows lawful orders and findings made by Fiji's Ministry of Environment. These principles particularly apply to any storage of fuel or other pollutants/chemicals that may be stored in ageing or seeping tanks. 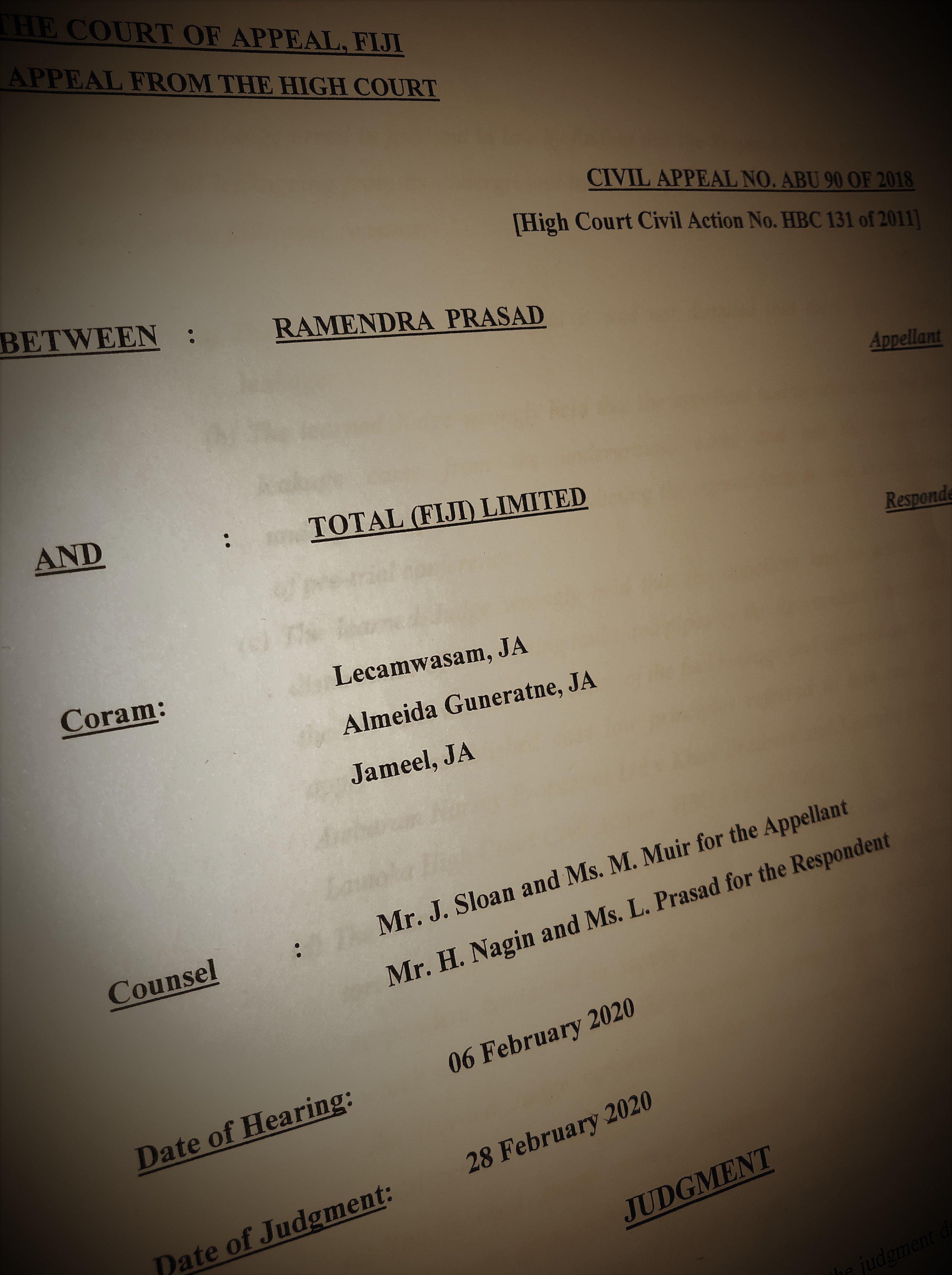 Please note: This legal bulletin is not and is not intended to be legal advice. It is published for general information purposes only.